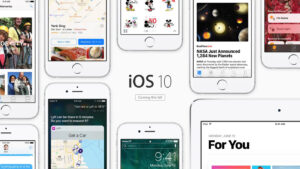 Apple iPhone and iPad users will be pleased to hear that the iOS 10 is here with some new features. You also get some improved while others are there just make up numbers. Available later this fall, but you can get first look at the iOS 10 from July via Apple’s Public Beta program.

Swipe right to get Music on. (Photo: Apple)

Apart from this, Apple Maps is more capable than ever. You can ask for direction, pick a restaurant, book a table and even hail a cab as well. However, it must be noted that, not all the features are available across the globe.

Also, you get host of new options and features on the Message. Write in your own handwriting, use Bubble text feature to keep the receiver guessing as to what the message has in store. Add a bit of glam to the message with live emotions.

As announced by Apple, the iOS 10 version will only be compatible with iPhone powered by the A6 processor. This basically means that iPhone 4S users will have to make the upgrade in order to use the iOS 10 later this year.

Siri Open to Third-Party Developers After Falling Behind the Competition