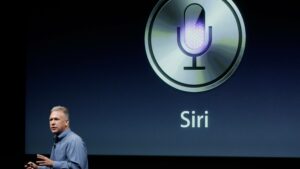 On Monday, Apple unveiled a series of improvements to its digital assistant Siri, but the tech giant still trails rivals such as Google and Amazon in the red-hot field of artificial intelligence, experts say.

Apple’s biggest move was opening up Siri to third-party developers for inclusion in their apps, paving the way for users to hail a ride from Uber or send a message with Tencent’s WeChat using voice commands.

But some wondered why Apple had not made Siri an open platform much sooner, noting that competing products including Amazon.com’s Alexa, Microsoft’s Cortana and the Google app are already open to developers.

“Is it too little too late?” asked Oren Etzioni, who is CEO of the Allen Institute for Artificial Intelligence.

Siri is five years old and still trying to learn how to play well with others.

Voice-powered digital assistants could eventually perform many tasks that currently require a smartphone app or a keyboard and a mouse. Hence, they are considered a key strategic battleground for all the major tech companies.

The winner of the assistant wars might able to take a cut of purchases made on its platform and also steer users toward its products and those of its allies.

“This is a new platform war with huge stakes,” said Gary Morgenthaler, a venture capitalist who invested in Siri when it was a startup.

It ultimately challenges search and the market capitalisation of Google.

Apple essentially created the category by purchasing Siri, the startup behind the eponymous digital assistant, which quickly became a cultural touchstone after its release on the iPhone.

As a startup, Siri worked with a variety of popular apps, but Apple cut off third-party access to the service shortly after the acquisition. Monday’s move brings the assistant closer to its original vision.

OS 10 will let you see who is calling you. (Photo: Apple)

It’s pretty sad for those of us who were part of the original team. The rate of innovation has been less than what we would have imagined.

Apple was slow to recruit talent relative to peers such as Google and Amazon, and its strict privacy stance limits data collection, which is critical for making assistants smarter.

But Apple took other steps to weave artificial intelligence more tightly into its operating system.

The Photos app will soon study users’ images to help them organise shots of favourite trips and occasions. The company said it has also made progress in determining the context of a message, helping it serve up better replies for users.

Apple may be a step behind Google, but “would say they are close enough that Google is not going to leave them in the dust” said Morgenthaler.