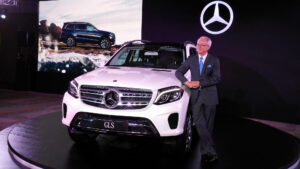 Mercedes-Benz has released the GLS SUV in the Indian market, which will also be locally produced as announced by the automotive company on Wednesday. Fondly known as the S-Class of SUV by Mercedes, the GLS (350d variant) will compete with the likes of Audi Q7 and the recently launched Volvo XC-90 with its price tag of Rs 80.38 lakhs (ex-showroom Pune). The GLS packs the off-roading capabilities of the G-Class and the sedan segment of the S-Class.

The GLS, for the first time, offers a 9G-TRONIC 9-speed automatic transmission which drives all wheels via the 4MATIC all-wheel drive system. Mercedes claims that the GLS 350d can zoom from 0-100 Km/hr in 7.8 seconds, hitting the top speed of 222 Km/hr.

There’s enough boot space to carry luggage for more 4 people at the same time. The SUV also comes with full LED headlights and Active Parking Assist with a 360-degree camera.

The infotainment features of the Mercedes-Benz GLS SUV.

Additionally, you have the panoramic sunroof, a new centre console with new trim options. Mercedes-Benz has made the GLS SUV fully compatible with Apple CarPlay. This way, iPhone users can get the best out of the 8-inch COMAND infotainment screen with its smart automation features.

The Startup’s Guide To International Trade