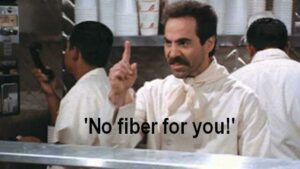 The day after President Obama came out with a statement that the FCC should preserve net neutrality, AT&T CEO Randall Stephenson said they are halting their high-speed fiber infrastructure build-out until after the FCC makes a decision.

“We can’t go out and invest that kind of money deploying fiber to 100 cities not knowing under what rules those investments will be governed,” Stephenson said. “We think it is prudent to just pause and make sure we have line of sight and understanding as to what those rules would look like.”

And I suppose the follow-up sentence would be ‘and if we don’t like those rules we’re not going to play anymore.’

Why don’t they just come out and say, ‘If the FCC tries to do something we don’t like then we are going to start having lots and lots of network issues. We are going to make our customer’s Internet experience as miserable as we can. And because of our exclusivity arrangements with hundreds of towns and cities across the U.S. those customers have virtually no alternatives. So if we don’t get our way it’s the FCC’s fault that our customers will suffer.’

One question I have is, these days which is more expensive, copper or fiber?

Perhaps one of the first things the government ought to do to insure net neutrality and true broadband competition would be to pass a law saying that all exclusivity deals that prevent competition in any area be declared void. Currently AT&T, Comcast and others can play these kind of games because they have agreements with local governments that prevent anyone from building a competing system in those areas – in many cases even the local government is not allowed to offer competing services.

If we remove those exclusivity arrangements then companies like AT&T wouldn’t be able to pull this type of crap because other companies would be able to step in and take away their business. AT&T slowing down or halting innovation would simply make them less competitive. If people really had a choice then why on earth would anyone pick a company like AT&T that admits it isn’t moving forward, they aren’t improving their service and if they don’t get what they want they will punish their subscribers.

AT&T has been charging their customers (phone, Internet and mobile subscribers) an extra fee every month since the early 2000’s to pay for fiber networks that were supposed to be deployed by 2005. So where has all that money gone?

You have to wonder if AT&T is trying to regain their status as the most hated company in the U.S. (a dubious title currently held by Comcast).