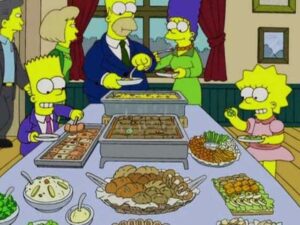 HBO, CBS and now the Simpsons World are going to be available online (with a subscription). Barely a week after CBS announced it was cutting the cable by offering a $6 a month online subscription version of their current season offerings plus thousands of past shows on demand, it was announced today that the Simpsons will also become an online ‘channel’ although you will also have to have a cable subscription.

The idea of being able to access every episode of the Simpsons (over 550 episodes or roughly 183 hours) is a bit mind numbing in a sort of amusing yet completely frivolous way. Sure there are going to be a lot of college kids attempting to watch every single episode in one humongous Simpsons gorge-a-thon (although I’m not sure how many will be able to stay awake for 7.6 straight days).

But the idea of watching 25 consecutive Treehouse of Horror episodes (a mere 8.3 hours) is definitely doable.

Simpsons World is just the next step toward a world where we can pick and choose our channels from the internet and build our own bundles.

It probably won’t be any cheaper than adding an extra package to a cable or satellite subscription. But if you are only interested in a handful of channels or types of channels then it could end up being cheaper than paying for 200 channels (at a lower cost per channel) yet only watching 10 or 20 of them on a regular basis.

The waters are probably going to get a bit muddy as more and more networks and content providers dip their toes in the online subscription pool. Some, like Simpsons World, will still maintain a loose tether to the cable and satellite companies requiring that you already have a separate subscription to a service provider.

I suppose we could include the cable and satellite company’s existing on-demand (and pay-per-view) offerings in the mix.

And then we have the recent rumblings from the FCC that they might redefine what it means to be an MVPD (multichannel video programming distributor). If something like that happens then it could re-open the door for companies like Aereo who were offering online subscriptions to broadcast channels by dedicating a strategically-placed, individual antenna to each subscriber. Dish, Sony, DirecTV and Verizon have all expressed interest in becoming online MVPDs.

It’s going to be interesting to see how everything shakes out in the end.

Is that a zombie in your pocket? (Or are you just happy to eat me?)