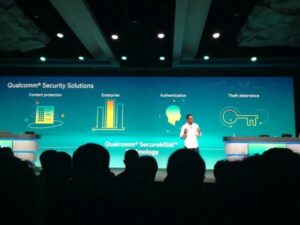 Qualcomm’s greatest strength is in connectivity this contrasts with Intel’s strength in processor performance and NVIDIA’s in graphics (all of these firms had big events this month).   Each firm’s vision is tied very closely to their core competence Intel stresses computing power, NVIDIA realism, and Qualcomm communications and since I’m at Qualcomm’s Uplinq event this week, let’s turn the technology that Qualcomm is showcasing into a view of the future.

Qualcomm has a number of initiatives and consortiums that are focused on making things connect better than they do today.  In their future your cell phone not only connects and can stream through all your TVs and Music devices if you want a tune you have on your phone on any music device in any room at any time you just push it there.   This isn’t just music but should include video as well.  Rather than the mess of remote controls, set top boxes, and game systems you have today that don’t talk to each other and are often incredibly difficult to set up they are trying to create a structure where your table or phone controls everything and can push anything these devices can access to your sound and video systems.

This doesn’t stop at the living room but moves to cars, your office, hotel rooms, and even trains, planes, and busses.   And it isn’t just music and video they imagine that this future will have lights, air conditioning systems, appliances, security systems, and even blinds controlled by every smartphone or tablet that has been authorized to control them.

With a Qualcomm phone and a home full of compliant switches, thermostats, appliances, TVs, and the right car you’d be like a god able to control everything manually or automatically and each system would jump at your commend.  You’ll be Harry Potter on steroids and that isn’t all.

With LTE Direct Qualcomm is proposing a system where every connected phone and tablet would be able to connect to every other phone and tablet in close proximity.  Think of being in New York and needing help, what are the odds that a Facebook, Twitter, or LinkedIn friend might be close by to help?  Probably reasonably good and LTE Direct will make the connection.  In short this technology allows things close to you to tell you stuff through your phone.  This includes both smart devices and other phones and your phone automatically talks back.  You can better locate people you know who are walking, driving (potentially even flying) near you and all of this communication is peer to peer it doesn’t need to go through a cellular network.   The advantages range from tour guides being able to better track the people in a tour to stores being able to better direct you to things you are looking for or deals you might be interested in that you’ve wondered close to but might not have noticed.

One of the devices they showcased was a wearable phone for small children that the parent could track and was voice enabled.  The parent could monitor and talk to the child where ever they wondered and provide immediate help of they got disoriented, lost, or injured.   But it gets better.

Now imagine you put this capability into smart glasses that you would wear.  You wouldn’t have to hold your phone up to see what was going on, it would be displayed in front of you.  Someone walks up their name and relevance to you appears magically in front of you (which is kind of handy with Facebook friends or if you are like me and can’t remember names to save your life).

Going back to your car in a big parking lot?  Just look around and follow the beacon that appears over your car and the virtual pixie that navigates you to the beacon.   I can imagine a Disney branded option that could give you Tinkerbelle (the fairy from Peter Pan) as your personal guide to wherever you wanted to go.

Wrapping Up:  And Robots?

This is rather amazing and it is kind of scary to some of the older members of our community because it represents massive change.   And we can’t even stop there because Qualcomm showcased robots starting from very small and limited to reasonably large and strangely cute.  Autonomous but controlled by your phone, tablet, or wearable device you could use these to supplement you (like look places you can’t go or that are miles away from where you are), provide security (think walking burglar alarm), or simply entertain your kids or pets.

The world of tomorrow will be very different from the world we currently live in.  It will be massively remote controlled, largely virtual, and far more connected then we can now imagine.  It will be equally frightening, amazing, and increasingly magical.   One final example is a technology they are working on where cancer cells can be illuminated and displayed in head mounted 3D displays so they can be more effectively assessed and removed.  The Doctors effectively have X-Ray vision without the radiation and can become more effective medical superheroes.   That’s actually pretty cool and it could save your life.