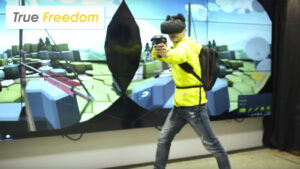 The future of virtual reality (VR) looks encouraging. However, unlike most technology evolution, VR is the one that most of us believe can take gaming to a whole new experiential level. Oculus and HTC are spearheading the VR space with their Rift and Vive VR gear but they are not the only ones looking to pull off something special.

But most of their magic gets tangled between wires, and the use of heavy-loaded hard to move around hardware.

All good to go with your VR Backpack kit. (Photo Courtesy: YouTube/Zotac)

So, before you ask about the ‘special’ VR factor, we’d like to introduce to you the new-age of VR called the Backpack VR gear. As the name suggest, Backpack VR is nothing but a collection of VR gear that goes in your backpack and can be used anywhere to enjoy the magic of virtual reality.

Virtual Reality in a Backpack? We Say Yes!

You might be wondering why are we excited about carrying a powerful system rig on our backs, which can possibly burn us? More than the health hazards, we can’t wait to see whether the trick could actually work out to be the best possible innovation that virtual reality has been looking for.

The Backpack PC is nothing but a portable yet powerful computing device equipped with top-of-the-line hardware to support VR gaming. The connectivity bit is taken care by the the built-in ports that ensure you get to enjoy VR without worrying about tripping over wires.

Most of the VR Backpack armoury was first seen at the Computex 2016 in Taiwan earlier this year. Brands like HP, Zotac and MSI have invested their interests in turning the concept of portable VR gaming into reality. Gadgets like these could help the likes of Oculus and the HTC to grow in the VR field in the near future.

Most of the work being done is kept under the radar, but we expect to hear and see more of the same throughout this year. Possibly we might also get to know the true cost of owning these cool gadgets.

And if this is how VR gaming will turn out to be in the future, we can’t wait to get our hands on them.

Most of us might wait for a 4K-supported, VR-enabled Xbox Console, but that will take a longer time than going for a VR Backpack.

Also, truth be told, it wouldn’t be unfair to say that pairing the might of Oculus Rift’s VR capability and keeping them portable on your back just sounds too cool a proposition to miss.

Game of Thrones: The Season of Ice and Fire – Spoiler Alert