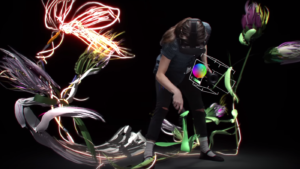 You already know that virtual reality is set to be a big part of our future, with gaming and shopping (among other things) to fall under its stream. Cool gadgets like the HTC Vive, Oculus Rift and even the Samsung Gear VR (made by Oculus) give us a glimpse into the virtual future.

And now, you get to paint on the canvas that is virtual reality, all thanks to Google’s Tilt Brush. This device has the power to match the excitement that Microsoft Paint once generated, except you get this Brush with a virtual twist.

Tiltbrush Tilt Brush lets you paint in 3D space with virtual reality.Your room is your canvas. Your palette is your imagination. The possibilities are endless.

You get different options of Brushes to use with the VR headset, which is only limited to the HTC Vive headset for now. And you’ll also need to be signed in with Steam on the Vive to make the best of the Tilt Brush.

This device and the technology can work its magic for artists, fashion designers or even architects, allowing them to express their creativity in this new medium.

So, what’s the cost of using the Tilt Brush? You need to buy the HTC Vive for starters (priced at $799) and make the best use of its hand-held controllers to set the brush rolling.

Google is betting big on the VR space and Tilt Brush is just another way for them to stand apart from the usual crowd in the circuit right now.