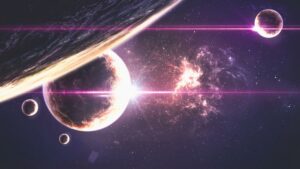 Michael Gillon and the team from the University of Liege started their research project five years ago. Only in September last year they discovered three planets orbiting around a nearby dwarf star known as Trappist 1.

As the size and temperatures of these three “red worlds” were comparable to the Earth and other planets from our solar system, it could be the best place for finding life, Xinhua news agency quoted Belgian scientists as saying.

The study showed two of the researched planets have orbital periods of about 1.5 days and 2.4 days respectively. Orbiting time of the third one is around 10 days, Gillon said.

We are already preparing the next phase which will be the most interesting. It is the James Webb space telescope, which is a very big space telescope that will be launching in 2018, so two years from now and with this telescope we will be able to study atmosphere. So, currently we are trying to measure the masses of the planet.

Scientists from Belgium are working in cooperation with international researchers from the US and Britain. They mainly work through the internet system connected to one of the prototype telescope based in Chile.

To detect potentially habitable planets researchers use a so-called transit method. They observe specific stars and are trying to catch the planet that will pass in front of them.

Micheal GillionWe made this programme on our small robotic telescope Trappist which is in Chile as a prototype for our more ambitious project which is called Speculoos … It will use bigger telescopes with more sensitive instruments to explore more.

With current Trappist telescope scientists were able to observe only 60 targets. With Speculoos the scope will be wider, up to 500 objects.

First Made in India Space Shuttle to Launch