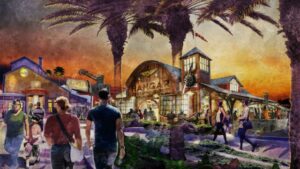 While we won’t have a new Indiana Jones movie any time soon, would you like to hang out at an Indy themed restaurant?

Now that Disney owns the character, there will be an Indy themed place to eat at Disney World this fall. As Slash Film reports, it’s going to be called Jock Lindsey’s Hangar Bar, and you may recall that Jock was Indy’s pilot. (You’ll surely recall the scene when he flew Indy to safety in the beginning of Raiders, especially when Jones discovered his pet snake Reggie.)

As Disney officially tells us, there will be cocktails like the Hovito Mojito, meals like the Air Pirates Everything Pretzels, and Rolling Boulder Meatballs. The Hangar Bar will fit the theme of the movies, everything down to the airplane hangar design, to the food and drinks of course.

So while we won’t have a new Indy flick for some time, you can definitely hang at Lindsey’s Hangar at Disney World, where there will also be Star Wars and Avatar attractions coming soon as well.

The Self-Driving Car Safety Godsend: Or Why Consumer Watchdog is Full of Crap