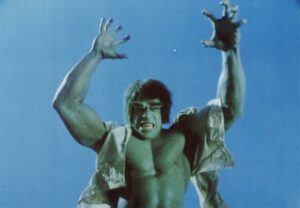 There have been many people dying for a Hulk movie for ages, and one of the big reasons is because we loved the TV show starring Bill Bixby and Lou Ferrigno as his green alter-ego.

The show’s creator, Ken Johnson, just spoke to Rolling Stone about the show, and he recalled he originally wanted Arnold Schwarzenegger in the role, and while so many of us loved it as kids, Stone called the show an “unexpectedly adult-leaning superhero series – a harbinger of the multimedia domination Marvel Comics’ character would achieve decades later.”

Johnson was offered a variety of Marvel heroes, but he recalled, “I don’t get along well with primary colors and spandex.” Drawing from deeper sources, like Les Miserables, which inspired David Banner being a fugitive, and Jekyll and Hyde, “I could try to turn this ludicrous thing called the Incredible Hulk into an adult drama built in the traditions of Greek tragedy.”

Johnson also learned the Hulk was green because the color worked out better at the comic printers than grey, which was going to be the Hulk’s original color. (Johnson was thinking the Hulk should be the color of rage, red.)

Unlike the comics, the Hulk also didn’t speak. When Lou Ferrigno asked Johnson why the Hulk didn’t have dialog, he told the champion bodybuilder, “Well, Louie, for starters, he didn’t come from Brookyln!” Johnson added, “Do we really need him to say ‘Hulk Smash?’ Hulk talk sounds dumb, and I decided it would be better if he said nothing and I just let him roar.”

Why No Loki in Avengers Age of Ultron