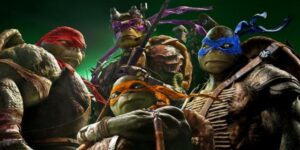 This year is the twenty-fifth anniversary of the Teenage Mutant Ninja Turtles movie, which was geared more towards kids, but it helped bring the famous comic book to national notoriety, and it made a ton of money, making New Line Cinema major players in the movie biz.

So of course, there’s the recent reboot with Megan Fox where the Turtles look larger than ever, and now a sequel is coming together with Laura Linney in the cast. You may remember Linney as Jim Carrey’s wife in The Truman Show, and she was also in the acclaimed films You Can Count On Me and The Squid and the Whale.

Megan Fox will be back again, and the cast also includes Tyler Perry. As to why Linney is doing Turtles, she just had a kid and The Hollywood Reporter tells us she’s interested in taking on movies that the younger set can enjoy.

The new Ninja Turtles is currently filming in New York, and is slated for a June 3, 2016 release.