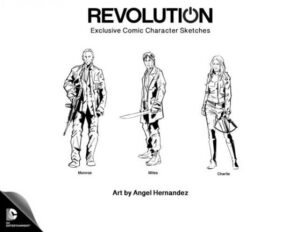 There’s a lot of series that never get a chance to complete the story. Not everyone’s as lucky as Game of Thrones, The Sopranos, or Lost, where you can leave when you want to, and while JJ Abrams had a big hit with Lost, he had two big series in a row cancelled on him, Alcatraz and Revolution.

But now Revolution’s getting a second chance, via the graphic novel format. As Deadline reports, there will be a digital graphic novel that will be four chapters long that will tie up all the loose ends of the show.

Writers from the show, David Reed and Ryan Parrott wrote the comic, and the story came together in a writer’s room, just like it was a regular series. The chapters will also be released on a weekly basis, on Mondays, through http://www.ComicBook.com, then you can read it on the show’s Facebook page.

In a statement, the Revolution team said, “Everyone has generously agreed to work for little or no money. They’re doing it, because like you, they’re passionate about this story and want to see it end correctly.”