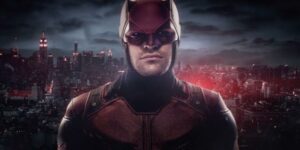 As we’ve mentioned many times before on TG, there’s what a superhero’s costume looks like in the pages of a comic, and what it looks like in a movie or a TV show. Some costumes, like Superman’s, are easily adaptable, while others need adjustments.

So now here’s the Daredevil costume, and we certainly have no complaints about it. Of course the wrong costume can look silly, but the costume should only be one part of the puzzle, not the whole enchilada.

Great costume or no, the critics are raving about Daredevil, which gives us a lot of hope for the next Marvel Netflix series, especially Luke Cage, one of my favorites, and Iron Fist.

Among the great reviews Daredevil has received so far, Entertainment Weekly has called the character “Marvel’s dark night,” and Slate calls it, “dark, smart and unpretentious.” Nice to read that apparently Netflix finally got this character right, and you’ll be able to binge watch all thirteen episodes on April 10.

First Reaction to Avengers 2 Has Hit the Net