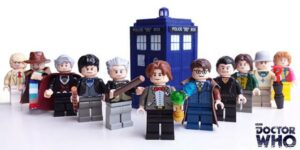 Okay, so the Lego Movie didn’t go home a winner at the Annie animation awards, nor will it take home any Oscar gold either, but Lego’s got a lot of cool stuff in the works, from the Avengers Helicarrier, which has nearly four thousand pieces and will cost nearly $400, but there’s also Dr. Who and Wall-E sets in the works.

As Collider reminds us, Lego has it set up on their website that you can submit ideas for potential sets. If your idea gets 10,000 votes, it might make it. One great fan idea, a Doctor Who set, is apparently going to happen, and the company has made a deal with BBC Worldwide.

An estimated time of arrival is some time before the end of the year, and a BBC executive said in a statement, “I can’t wait to see what Lego produces.”

And a Wall-E lego design was submitted by Angus MacLane, an employee of Pixar, and it does indeed look very cool. Not to mention there’s also a Lego Jurassic World game in the works as well.

So again, it’s lame that The Lego Movie didn’t get the awards recognition it deserved, but the company’s still going strong with a lot of cool stuff for the year.

Astro Boy Movie in the Works