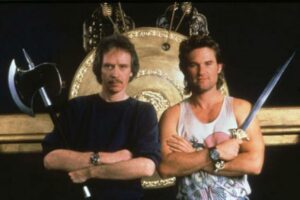 If you’re a fan of John Carpenter, you’re probably very excited by the fact that he has a new album of music out, Lost Themes. Carpenter composed the music for his movies primarily out of function, he couldn’t afford a composer back in his low budget days, but as the themes for Halloween and Assault on Precinct 13 have proven, he’s written great stuff.

As Carpenter told Esquire, he used the Logic Pro music program with plugins to compose his new music. “It’s not difficult at all to set up. Then it’s just creativity.” Carpenter recalled composing the music for Halloween and Precinct 13 in three days because that’s all he had.

He also told me in my horror film book, Reel Terror, that he would usually compose the music after the movie was finished, where his long time producer, the late Debra Hill, thought he had the music in his head, and constructed the movie to it. As he told Esquire on Precinct 13, “I had cut the movie already so I already had the scenes in mind and thought, Well, what do I need for this particular scene?”

One interesting factoid we didn’t know is the ZZ Top tune, Just Got Paid, was the inspiration for his score in Big Trouble in Little China. “I copied the beat, and added my own stuff.” Carpenter also likes his later scores more than the earlier ones like Prince of Darkness, In the Mouth of Madness, and Vampires. “I think over the years you have to progress, so I’m proud of certain later stuff.”

Lego Planning Sets For Dr. Who and Wall-E