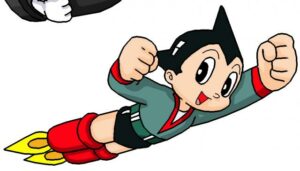 If you like anime, you’re probably at least aware of the classic cartoon Astro Boy. Yes, it’s from a long time ago, but like Speed Racer, it was a big childhood favorite for many growing up. Now there’s talk of, you guessed it, an Astro Boy live action movie.

As the Hollywood Reporter tells us, Astro Boy is in development through Animal Logic Entertainment, an Australian company, which will be partnering with Japanese company Tezuka Productions. Animal Logic is an FX company who has done major work for Happy Feet and Avengers: Age of Ultron. They’re trying to get another animated big screen adaptation off the ground as well, a Betty Boop movie.

As the Reporter reminds us, Astro Boy started as a manga in the ‘50’s, created by Osamu Tezuka, who has been considered the Disney of Japan.

In other animated live action adaptation news, the Robotech movie, which Tobey Maguire was attached to at one point, is back up and running at Warner Brothers according to Deadline. Now Michael Gordon, the screenwriter of 300 and G.I. Joe: The Rise of the Cobra, is onboard to craft a script, and Andy Muschietti, who helmed the Latin horror film Mama, is being looked at to direct.

Lego Planning Sets For Dr. Who and Wall-E

John Wick Sequel in the Works