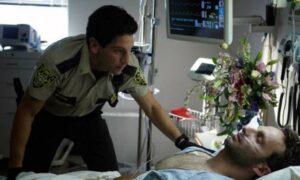 There’s little worse than when a series ends badly. The Sopranos and Dexter had two of the worst series finales in history, and it really left a bad taste in a lot of fan’s mouths.

Now there’s a fan theory that some of the current season of Walking Dead could be part of Rick’s coma dreams, but Robert Kirkman, creator of the series, set the fans straight. As The Wrap reports, Kirkman went on Twitter and said, “Going on record to answer this. Rick is NOT still in a coma. The events of TWD are definitely happening.”

Kirkman then made a joke, “But Carl and everyone else are all imagined. He actually NEVER found his family. He’s been crazy since he killed his first zombie. #joking?”

Fans come up with cock and bull theories all the time about movies and TV shows, and many of them are quite clever, but we don’t think The Walking Dead would pull something this dumb and potentially risk having the show jump the shark, or nuke the fridge, at this stage of the game.

Keanu Reeves Wanted In on Batman and X-Men