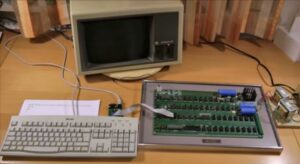 Many of us have to have the best, up to date technology, but would you pay close to a million for a computer? Can’t you get top of the line stuff for far, far less? Well, what about a computer built by the Woz himself back in 1976?

As hothardware.com reports, one of the first ever Apple-1 computers built by Steve Wozniak just went for $905,000, now making it the most expensive Apple computer ever sold. (Last year, an early Apple went for $671,400 at an auction in Germany.”

This computer was auctioned through the Henry Ford museum, and is believed to be one of the first 50 or so computers that Wozniak and Steve Jobs had built. There are believed to be only 63 Apple-1 computers that are still around, and the one that sold is apparently still operational, which is why it went for such big money at auction.

It’s hard to imagine actually using one of these for that price though. It’s really a piece of tech history and we wouldn’t be surprised if we see it wind up in a museum again some day. Along with the computer board, the person who bought this computer also got a tiny Sanyo monitor, a wooden power supply box, and some other long outdated little nick knacks to go with it.

Elon Musk: ‘we are summoning the demon’

No, The Walking Dead is Not a Coma Dream