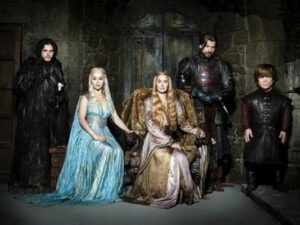 You often wonder to what extent the advent of CGI has taken away the need for extras. In the old days, Hollywood spectacles had “a cast of thousands,” and now you can create as many warriors on a hill as you want with a computer.

So it’s nice to see that Game of Thrones needs real people as extras, the casting call was for 600 people in Spain, but they got way more than they needed. As Entertainment Weekly told us, 86,000 applications came in, and they had to add more server space on the website to take care of the overload. According to EW, among the 86,000 was a banking executive who took time out from work for a shot at being on the show.

This could also be a case of the country giving its love back to a show that boosted their economy. EW tells us they’ve brought in a thousand local people to work on the show, and its helped Spain get out of a recession. Thrones also helped make $32 million for Northern Ireland when the show shot there last year.

The Ambassador of Spain called the Thrones production “a great, uplifiting moment for the country,” and clearly the show’s still going incredibly strong.