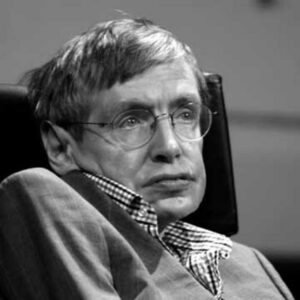 There’s a Steven Hawking biopic coming, Theory of Everything, that has already gained strong reviews for Eddie Redmayne’s performance in the title role. While it certainly couldn’t be easy to get Hawking out there to help promote the film, he’s now on Facebook to help raise awareness for the movie, and put up postings about whatever, just like everyone else.

As the Hollywood Reporter tells us, in the first post he mused a bit about the universe, and mentioned how he’s looking forward to connecting with people. In the second posting, he joked about taking the Ice Bucket Challenge, but had his children do it for him because he had pneumonia last year, and didn’t want to have a bucket of freezing water dumped on his head.

Apparently Hawking has given his biopic the thumbs up, because Anthony McCarten, who wrote the film, said Hawking cried when the film was shown to him. Hawking called it “Broadly true,” and as McCarten recalled, in relief, “I let out a sigh that I had been carrying for 10 years.”

The Theory of Everything opens on November 7, and there’s already very strong Oscar buzz for Redmayne’s performance, as well as Felicity Jones, who plays Jane, Hawking’s first wife.

Buzz For Interstellar Getting Stronger