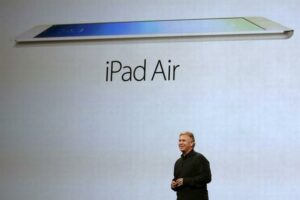 Boy Apple is really becoming a naming mess particularly if you realize the older products are still in market.  Right now, for $100 less than the iPad Air 2 you can buy an iPad Air, and for $100 less than the iPad mini 3 you can get a Mini 2, or if you are really cheap you can save another whopping $50 and get a Mini that is only two years out of date.  Whee?  You know some parent is going to do this and his kid is going to be embarrassed at school when he finds out daddy was a cheap SOB.

Most would ask “what idiot would want to save $100 to buy last year’s model?” and looking at the comparison chart I’m actually struggling a bit justifying the extra money for this year’s product.  Unless you need 128GB or have to have an A8 rather than an A7 then the choice is very clear.  Seriously look at the comparison and how’d you’d make the choice between 5 products and a whopping 15 different configurations easily (two to three memory choices and whether or not to get WAN for each model.  I’m guessing a lot of folks wish Steve Jobs simpler approach to this was still the rule.

I’ll make it easy, you’ll look stupid buying the older models, and you don’t need 128GB or a Cellular connection (use tethering on your phone instead because that way you can use the connection with other stuff like your laptop).   There are far better solutions for less money than the mini (like half the price) but if you want small get that otherwise get the iPad Air 2 with 64GB and call it a day.  That’s the best easy choice if you can’t figure this all out.

But what is next for the iPad?  Let’s talk about some of the technologies out there and the likelihood that Apple with pick them up.

Wireless Charging will be in the next wave of mobile projects.  The most interesting is out of Intel because it can be built into laptops or tablets and charge devices close by but not necessary touching.  At Intel’s developer forum this year they showcased this charging a laptop from under the desk and up to 6” from the laptop.   Imagine having your MacBook or iPad charging and just having to put your iPhone nearby to have it charge as well or doing the same with your MacBook and iPad?  The product providing the power has to have the more powerful transmission technology and given this is tied to Intel I’d expect a MacBook to iPad or iPhone solution but not an iPad to iPhone solution here.

The problem is this bypasses Apple’s proprietary plug for something Intel would provide and I know Jobs would have balked at this but Cook might not and it would be very cool.   This is one of those features I think will drive choice between tablets and I expect Google to jump on it with both feet.

This is already on the new iMac and the idea of pushing beyond retinal level may seem like crazy thinking but Qualcomm has done some studies indicating the eye can see and will prefer the higher resolution for text.  This would seem like a no brainer upgrade because it creates a clear reason to buy the newer product over the older one.  Right now the biggest drag on iPad sales is that people think what they have is good enough and pushing another level of resolution could provide the reason to buy that is currently lacking.   Samsung is already moving here with some products and Apple will need to counter regardless.   Apple does need help here, in shootouts they’ve been losing of late.

This is such a no brainer that I was surprised it didn’t show up the latest lines.  Basically the batteries are wired so the cells charge in parallel rather than in series requiring more power but also taking you to a full charge in 15 to 30 minutes depending on the number of cells.  The technology isn’t that expensive against the clear benefit and there are a number of products in market that have it now.   There are some new technologies coming that could charge your iPad in 5 minutes.  Now that’d be cool but likely not in the next generation.

This is the next technology behind the FPS technology that Apple and most others are using.  It is starting to show up in tablets with Dell leading the charge in tablets with their new Venue product.  It has had issues with overheating and useful life which is why we aren’t up to our armpits in OLED displays right now but the colors are amazing.  Moving to both higher resolution and OLED would be impressive but I don’t see any move from Apple in this direction yet and I doubt we’ll see it in the next generation iPads as a result.

Wrapping Up:  Other Stuff

Faster processors and better graphics are a given and the inroads NVIDIA has made with their Maxwell technology (Tegra K1)  is currently separating tablets from those that have screaming performance and those that do not.  Apple has shown an interest in higher graphics performance but hasn’t drifted toward NVIDIA for this on mobile devices yet though doing so would be consistent with their high quality image strategy.  Transflective displays would be amazing but no one can make a good one at iPad scale and Sapphire screens didn’t work for iPhones and likely won’t work for iPads because they are both too expensive and too brittle.  Given Microsoft’s move to make a cell phone a second factor for automatic security (the device unlocks when your cell phone is near) I expect Apple to pick this up because it creates an even stronger familial relationship between the iPad and the iPhone.

Overall, because this last generation really wasn’t that much improved over the prior generation, I expect a certain softness in iPad sales after the Christmas holidays forcing Apple to step it up a bit more.  The end result is I expect the next generation iPad to be a much more significant update than we saw with this one.  I’ll be many of you can hardly wait with the obvious exception of the folks that just bought a new IPad they are hoping I’m wrong.

Elon Musk: ‘we are summoning the demon’