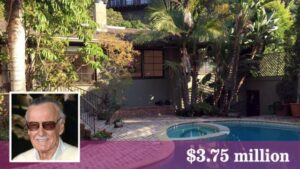 While I often don’t write about real estate that much on TG, every so often it’s nice to see how the other half lives, like when some big, pimpin’ rock star sells their home and there’s a virtual house tour online where you can go from room to room.

There’s quite a few websites dedicated to celebrities selling their houses, and now the L.A. Times reports that Stan Lee is selling his home in Hollywood Hills West for $3.75 million. This report tells us Lee’s pad has 2,500 square feet, four bedrooms and six bathrooms. The home was built in 1945, and it’s located in a cul-de-sac where the property is “walled and gated.”

Lee’s home is also being listed as “a build / develop opportunity,” which we’re assuming means a fixer upper.

So to any major comic fan who’s got major bucks, you can live where the great Stan the Man has dwelled. That’s obviously a whole other level of comic fandom, and for this price, you could actually buy the first issue of Superman and still have some change left over.