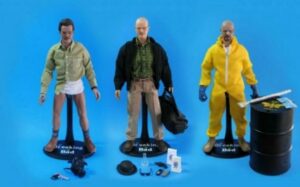 Imagine going to Toys R Us and seeing Breaking Bad toys right next to figures of Dora the Explorer and Spongebob. Well, apparently, this has happened, and parents aren’t real happy about it.

While it’s one thing to see Breaking Bad dolls in a more adult place where people would get the joke, you just don’t think of meth labs and Toys R Us going together. As CNN reports, a mother in Florida got a petition going to get these dolls out of Toys R Us, and it’s gotten over 2,000 signatures.

As the mom said in a statement, the toy chain’s “decision to sell a Breaking Bad doll, complete with a detachable sack of cash and a bag with meth, alongside children’s toys is a dangerous deviation from their family friendly values.” She also told one reporter, “Kids mimic their action figures. Do you want your child in an orange jumpsuit.”

Granted, this is perfectly fine for adults to buy on the net, or at novelty stores, but we do have to agree that the show isn’t for kids, and they could at least make the toys more kid friendly without a bag of meth and a bag of money, no?

In response to this, Bryan Cranston tweeted, “I’m so mad, I’m burning my Florida Mom action figure in protest.” And as this story was being finalized, Toys R Us pulled the Breaking Bad dolls, announcing they were going on “indefinite sabbatical.”

The Hobbit Movies Cost How Much Again?