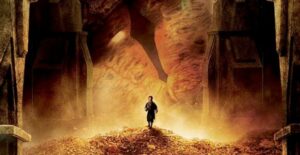 The last installment of The Hobbit, The Battle of the Five Armies, will be coming out on December 17, and we’ve read reports that all three movies have been very expensive, over $500 million. Now that figure could be even bigger than that.

According to The Hollywood Reporter, the Hobbit trilogy cost a whopping $745 million. Now granted, that’s for the equivalent of three movies, but that’s still a lot of money. The Reporter predicts that all three movies should make $3 billion world-wide, which means that Warner Brothers should make their money back, but this indeed takes movie budgets to a whole new level.

As the Reporter also mentions, the next big test for big budget flicks will be, you guessed it, the Avatar trilogy, which, like The Hobbit, will shoot in New Zealand, and will undoubtedly cost a fortune.

While movie budgets have been steadily spiraling out of control since at least the late seventies, it’s remarkable to think we may actually be getting to the point where a single movie could cost a billion dollars. No wonder Hollywood’s scared to death to take any risks..they just can’t afford to.

Parents In an Uproar Over Breaking Bad Toys

Avengers Age of Ultron Trailer to Play Before SHIELD Next Week