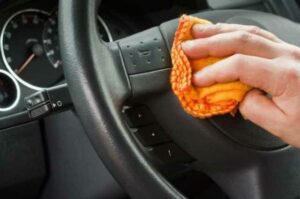 So far more than 14 million vehicles from 11 automakers that contain the Takata-manufactured airbags have been recalled worldwide. Rather than deploying like a normal airbag the Takata devices can explode in an accident hurling metal shards into the driver’s face.

In a statement today the company claimed that the exploding airbags are actually saving more lives because they encourage people to drive as cautiously as possible.

“Knowing that if you have even a minor fender bender an airbag filled with metal shards may explode in your face really makes you think twice about taking your eyes off the road,” the statement read.

The company claims that they did extensive research into people’s driving patterns and found that when people were told their cars had traditional airbags that would protect them in a crash they tended to be more lax about how they drove. However, when they told those same drivers that metal spikes would be shot into their faces if they screwed up they tended to pay more attention to what they are doing.

“Our exploding shrapnel-filled airbags were designed to provide drivers with an extra incentive to drive safely. Who wants a face full of flying shards of sharp metal at the cost of texting while driving? No one wants that.”

The company says that they originally planned to inform drivers of cars equipped with the killer airbags but the automobile manufacturers who installed the Takata devices thought it might discourage sales. Instead the company elected to put informative warning labels on every unit they shipped.

“All of our exploding airbags come with clear warnings that, depending on the particular model installed, will spray between 250 and 300 razor-sharp, surgical steel projectiles traveling at approximately 800 kph with a 37 degree spread throughout the automobile’s cabin when deployed,” said a company representative. “Unfortunately those warnings are usually hidden when the airbags are installed inside the steering wheel and tampering with the mechanism in any way can cause the airbag to explode so most people never had the chance to read the fine print.”

The airbags were designed by engineers in Takata’s weapons division who also develop the company’s popular anti-personnel weapons and landmines that have been used in war zones around the world.

“Our entire line of airbags are built to exacting military specifications,” the company stated. “We’re not sure what all the fuss is about. The bags work exactly as they were designed to work.”

Takata is currently developing a dashboard panel that will shoot three-foot long steel spikes into an automobile’s cabin if a car exceeds the posted speed limit and a navigation screen that will fill the car with poison gas if a driver attempts to make an illegal U-turn.

(And just in case anybody missed it, you can file this story under ‘tasteless automobile recall humor.’ And yes, of course I’m hoping to ride on the popularity of my GM recall spoof article posted yesterday.)

The Undead PC: The Most Impressive Thing Apple Launched Was A PC

Parents In an Uproar Over Breaking Bad Toys