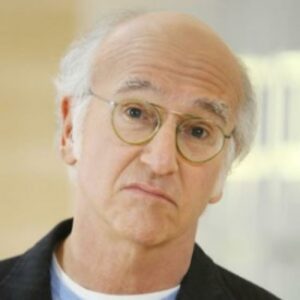 There’s plenty of guys out there who’d love to hook up with Jennifer Lawrence, if only they had the looks, fame and money. You’d think that her dream guy would be somebody like Brad Pitt or George Clooney, but it turns out her stud du jour is Larry David.

Lawrence told Vanity Fair, “Do you like Larry David? I’m in love with him, and I have been for a really long time. I worship Woody Allen, but I don’t feel it below the belt the way I do for Larry David.

In response to this, Larry was certainly flattered, but he said, “I don’t think I could do it.” (Come on Larry, this is Hollywood! No one’s gonna give you any static for dating a young girl, it sure didn’t hurt your buddy Seinfeld.)

As David continued to Page Six, “On one hand it’s very flattering, and on another hand, it’s kind of a shame – in terms of timing. I’d have fun watching the reality show of it, though.” David told Time, “It’s a shame I’m about 40 years older than she is.”

So he’s saying there could have been a chance if he was younger? They certainly would have made an odd couple, even if Larry was more age appropriate. He certainly had more hair in those days, resembling another Larry, from The Three Stooges that is. So it’s good to know that guys who look like Larry could have a chance with a chick like Jennifer, just keep ‘em laughing we guess.