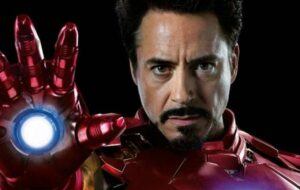 Well, we don’t think Mel will be helming any Marvel movies in the future, but now the news has hit that in addition to Avengers 3, Downey Jr. will play Iron Man again in Captain America 3.

This was a shocker to the Hollywood Reporter, because by all accounts he would be done with the character in Avengers 3, and there’s no plans for an Iron Man 4. Yet Downey has been meeting about a role in the third Captain America, which could potentially net him $40 million because he has a piece of all the Iron Man films. (You may recall this is what held up negotiations for the second Avengers movie, because Downey’s deal needed to be renewed.)

Reports tell us the third Captain America will be the “Civil War” storyline, where America fights Iron Man. Obviously with Batman Vs Superman coming up in 2016, superheroes battling each other could be the next trend in the genre.