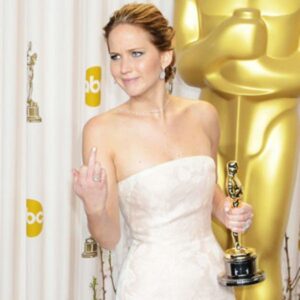 It seems like there’s a new nude photo hacking scandal every ten minutes, and we think there’s at least four that have happened in the last month or two, we can’t keep track. Now Jennifer Lawrence is speaking out officially in Vanity Fair, and she’s pissed.

Lawrence calls the photo hacking more than an invasion of privacy, it’s a “sex crime.” “Just because I’m a public figure, just because I’m an actress, does not mean that I asked for this. It does not mean that it comes with the territory. It’s my body, and it should be my choice, and the fact that it is not my choice is absolutely disgusting. I can’t believe that we even live in that kind of a world.”

Lawrence also said, “The law needs to be changed, and we need to change. That’s why these web sites are responsible. Just the fact that somebody can be sexually exploited and violated, and the first thought that crosses somebody’s mind is to make a profit from it. I just can’t imagine being that detached from humanity.”

Some have pointed out the irony that Lawrence is topless on the cover of Vanity Fair, but again, that’s her choice, and it’s more tasteful and controlled. Apparently the culprits have not been apprehended, and we still can’t figure out how all these hacks keep happening, but it’s obviously par for the course in the age of identity theft.

The Flash is a Ratings Winner

A Female Ghostbusters 3 Is a Go