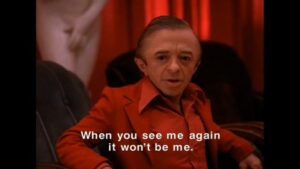 Twin Peaks was a big part of ‘90’s nostalgia, and while the show was short lived, the David Lynch creation is still very beloved among fans. Now it’s going to return in 2016.

As Rolling Stone reports, David Lynch is coming back to the series as well. The return of Twin Peaks will be for nine episodes on Showtime, and Lynch will direct the entire series. Lynch and Peaks co-creator Mark Frost have said in a statement, “The mysterious and special world of Twin Peaks is pulling us back. We’re very excited. May the forest be with you.”

Lynch and Frost thought of going back to the series three years ago, and a key line of dialog inspired them, where Laura Palmer said, “I’ll see you again in 25 years.” Frost told the New York Times, “That suddenly seemed like an entry point. Everything flowed from there.”

Before the new Twin Peaks will air, Showtime will reshow both seasons of the original to lead up to the new edition, and as the network said in a statement, “To quote Agent Cooper, ‘I have no idea where this will lead us, but I have a definite feeling it will be a place both wonderful and strange.” We wouldn’t expect anything less from Lynch.

Dredd is Back to Fight the Dark Judges