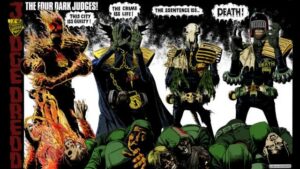 We’ve said it a number of times here on TG, we’d love to see a sequel to Dredd, and the perfect follow up would have him fighting the dark judges. Now it will actually happen in an unofficial web sequel.

The Wrap tells us this sequel is going to be online, and you’ll be able to watch it for free. This project was launched by executive producer Adi Shankar, and it’s part of his “bootleg universe” that includes the shorts Punisher: Dirty Laundry, and Venom: Truth is Journalism.

The fans are still pushing for an official Dredd sequel with Karl Urban, and maybe this unofficial follow up will help push it through. We’re especially hoping this will inspire the powers that be to do an official version of Dredd fighting the dark judges, which could really make a hell of a fight.

Addressing the fans on YouTube, Shankar said, “You guys [the fans] took something that society deemed a failure, and you turned it into a success. You guys have redefined what success means. It’s not opening weekend, it’s not box office, it’s cultural resonance. This movie has resonates with you guys, and that’s so f*cking cool.”