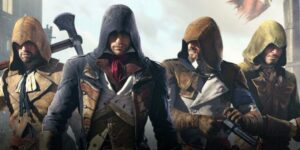 There’s been a lot of debate about how many frames per second movies are shooting at. Peter Jackson thought this was the way of the future, until fans and critics alike didn’t like the look of high frame rates, comparing it to a Telemundo episode.

Video games moving fast, now that’s another story, although there is definitely debate among fans about game frame rates as well. Uproxx is now telling us that Assassin’s Creed: Unity “will be locked at thirty frames per second and 900p.”

As Videogamer.com points out, Assassin’s Creed 4: Black Flag was shipped to stores at 900p/30fps, and the PS4 version was brought up to 1080p. There are also plans to bring Unity up to 1080p as well.

At whatever speed the game’s running, Time writes that Assassin’s Creed: Unity has “the most elaborate interactive simulation of the tumultuous time yet conceived,” and IGN called the game “dark, bloody, beautiful.”