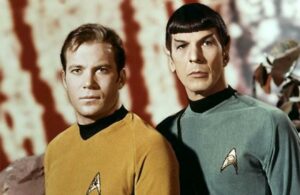 We just reported the news that the next Star Trek film, the third one in the new model Trek, could be shooting within the next six months, or so Zachary Quinto thinks. But could William Shatner be aboard this time?

As we all know, rumors like this float around all the time on the net, and we always have to take this stuff with a grain of salt, so with that in mind, here’s the spiel, according to Screen Rant…

The next Trek script supposedly has a scene where the original Kirk and Spock are reunited, but Nimoy may not be able to perform in the film as he’s been in ill health with lung problems. Shatner also claimed that there was a cameo for him in the 2009 Trek that got cut from the script. (Abrams reportedly said that Shatner wanted a bigger role in the movie, which Bill denied.)

In a recent tweet, Shatner said, “I don’t know anything about the current gossip…Right now it’s just rhetoric to cause hype.”

It would indeed be wonderful if we could have the two big daddies of Trek together one more time, but if Nimoy’s health isn’t up to it, we completely understand. While the last Trek left a lot to be desired, we hope the next one will help redeem the new model Star Trek’s legacy. That alone should do Bill and Leonard proud.

It’s Okay For Hollywood To Use Drones