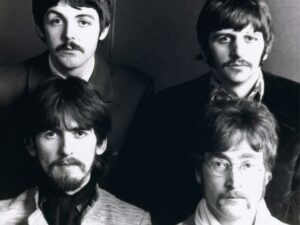 Okay, so you’re not buying one of John Lennon’s guitars, or the soundboard from Abbey Road, but some fans have to have practically anything Beatles related, and here’s one of the latest pieces that is currently on the auction block…

At first, you think, seriously…a piece of the curtain from the Ed Sullivan show? But yes, as Rolling Stone tells us, you can win a chunk of the curtain, but it’s also autographed. If you want it, it’s $550,000, and you can buy it at The Fest For Beatles Fans, which will be hitting L.A. in October.

Other items you can purchase at the event include Yesterday and Today with the rare “butcher” cover for $4,500, and the band’s first contract they signed with Vee Jay Records in 1963 for $100,000.

We know Beatles fans are fanatical, but we’re definitely curious who loves the band so much they would put up this kind of money. And doing a quick online search, what are the biggest prices people paid for Beatles memorabilia?

Get ready for a battle between law enforcement and technology