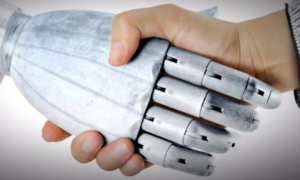 In the future, robots might represent you in contracts, whether it is a lease with your landlord or the supply chain for your business.

Agrello is a blockchain-agnostic smart contract system. The founders contend it creates a simpler, better functioning smart contract than other such platforms by putting the contract in ‘plain English’.

“We use blockchain to create smart contracts that actually act as contracts,” Agrello CEO and co-founder Hando Rand says. “They are signed obligations to be performed in line with the contract execution data registered in the blockchain, and transferable by the blockchain for evidence. This minimizes the amount of trust needed.”

“We have many domains in our society, ever more complex, where the need for information and value transfer logistics is important,” Mr. Norta elucidates. “So, currently, that involves many people, and lots of bureaucracy. It’s slow, takes time, and there is lots of paperwork involved with such legacy systems. It is now feasible to automate this, and do so in a well-distributed manner with the blockchain, which serves as a trust-machine in the middle.”

Agrello, whose white paper is forthcoming, believes the combination of AI and blockchain is the solution to such complex problems. “By bringing in agents on top of smart contracts, you achieve information and value transfer logistic automation and currency,” says Mr. Norta. “And the system can take into consideration forthcoming holiday systems to predict bottlenecks and on and on.”

If you have several parties working towards a particular goal, they coordinate with each other by exchanging information. “And this involves not only information, but payment transactions or transactions that transfer, say, smart key access,” Mr. Norta comments. “So, you can access an apartment or building in a process intermediated by blockchain technology.”

This can become a very time consuming endeavor, according to Mr. Norta. “Especially, if you have to determine how you receive and send the right type of information, at the right time, from the right source, and to the right destination,” he says. “Today, there are office workers who do that.” According to advocates of the technology inspired by bitcoin, this can be automated thanks to blockchain.

“If a hospital wants to have a full, singular operational solution for all of its processes, with services, software, updates, training installation and upgrades,” Mr. Norta describes, “you obviously have enormous amounts of information involved. As well as many people from different organizations. In this scenario, you have to bring heaps of information together for a governing contract. And in the end? It’s a PDF.” Mr. Norta finds something more to be desired to account for such complex relationships.

This contract then gets signed, enforced and, in Mr. Norta’s thought-experiment hospital, the system is set up.

“The service contract will last for many many years, but then once this contract is running after the setup, you constantly have to check the deadline for the next upgrade,” Mr. Norta elaborates. “‘When is the next deadline for the next check? Do we have the right people in place?’” But, the responsibilities in overseeing such a system don’t end there.

The questions that come up, according to Mr. Norta, are: “What happens to malevolent agents? How is such an agent treated? Is it eliminated and replaced?”

The implications are far-reaching, from e-healthcare to e-governance. “We have many complex, highly distributed systems and spend a great deal of energy as a society on information and value transfer,” says Mr. Norta. “It’s costly, time-consuming and we can automate that now.”

This is what Agrello plans to do by adding AI and agent technology on top of smart contacts. “The smart contracts themselves are not all that in-and-of themselves aware,” elucidates Mr. Norta. “Until you bring agents into the pictures to enhance the performance of value transfer logistics.”

“We are working on setting up and running a complex computing system for municipalities, as well as the process of setting up a contract involving multiple parties and terminating it,” says Mr. Norta. “Today, this is still paper-based, time-consuming and expensive. But, we can cut the costs.”

TOP-5 the Most Necessary Programs for Windows