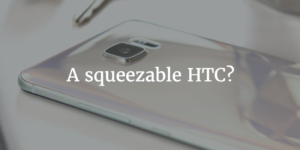 A flagship phone, rumored to be named HTC Ocean, with unique squeezing control specs, is to be released, hopefully, this April by the phone giant, HTC.

This rumored phone was originally dubbed ‘HTC Ocean’, and now the HTC U comes with very subtle frames, volume rockers and standard buttons would be replaced with sliding and modern squeezing of the device, according to VentureBeat, the reliable leaker.

The HTC U is coming to join the already existing U-patented phones, including the HTC U Ultra and the HTC U Play. At the early part of this year Blass leaked a video of the supposed HTC U. This leak is also in agreement with a leak from last year by the same Blass, showing the then named HTC Ocean, and showing its sensitive touch features. It also emphasized on how this new buttonless HTC invention operates.

So what does this phone have for potential users? Camera, memory, storage, and others. Technically, it’s a 5.5 inch phone that is going to house the sense 9 HTC’s user interface. It will also come with MicroSD slots and compatibility, an 835 Snapdragon processor, a back camera with 12-megapixels, internal storage of between 64 and 128 GB, and front camera of 16-megapixels.

Though the phone is not coming to be a game changer, at least for the entire phone market, it is an addition to HTC’s modern phones, giving HTC a competing edge with other phone manufacturers in the market. It is also bringing in specs like a higher storage space, more camera pixels for both the front and back, as well as a more robust processor.

Though this is a leak and not officially confirmed yet, it’s good to keep a skeptical eye, however, considering the authenticity of information from Blass, there wouldn’t be any surprises if the HTC U is released mid-April.

This article was first published on Technodite.com

Developing a chat bot – It’s not a tough job.