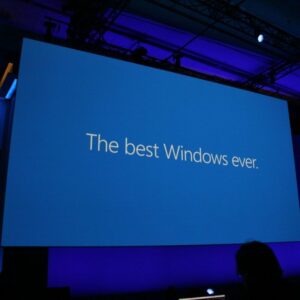 I’ve been using the Windows 10 Creator’s Edition for some time now but most of the rest of you won’t see it until April 11th. It has a number of improvements not the least of which is significant new protections against phishing web sites in Edge, far better 4K HDR support for apps like Netflix, and up to 1.5 hours of extra battery life in existing laptops that migrate to in. It’ll arrive with new, more affordable, 3D headsets and apps that support them, significantly improved privacy and security features and controls, better game streaming, and a bunch of things that your IT folks will really appreciate with regard to management and control.

But that all pales against the truly big change this represents, and that is a return to focusing on the user, something that Microsoft lost over the years, and with Creator’s edition, finally got back.

Losing Track Of The User

Before DOS and Windows, generally, the operating system and the hardware came from the same company. You’d think it would be relatively easy to focus on the customer but as IT grew as a practice in companies they became the buyers and the users of the technology were often subordinated to them. This led to the PC revolt which was largely user driven in the 1980s and the fall in power of firms like IBM and the raise of firms like Apple and Microsoft.

This initially changed the dynamic, sort of, in that the user was once again king but you could see a clear separation over time between Apple, who could remain user focused, and Microsoft that seemed to struggle between figuring out whether the PC OEM was the customer or whether the user was the customer. With Windows 95, Microsoft was focused like a laser on the user largely thanks to the war they had with IBM on OS/2 but once OS/2 failed, Microsoft pivoted to a blend of IT and OEM largely replicating the mistake that had given them the opportunity to displace IBM in the first place and Apple’s unique user focus, and a pivot to Smartphones, allowed Apple to go from being on live support to displacing Microsoft as the king of personal technology.

Windows 95 died out with Windows ME 5 years later and Windows bounced from bad product to good conflicted goals. Windows 2000 was largely focused on addressing the Y2K problem that was self-created by an industry increasingly thinking tactically (or believing the world would end in 2000), Windows XP was focused on fixing Windows 2000, Windows Vista seemed to lack focus on either OEMs or Users, Windows 7 was to fix Windows Vista, Windows 8 was focused on doing things that no one outside of Microsoft seemed to want to do, and Windows 10, initially, seemed focused on fixing Windows 8.

It seemed like Microsoft was largely in some kind of ugly loop where they, given they didn’t know where to go, pissed off users, and then used that as a foundation for what to fix next.

What makes Creator’s Edition different is that Microsoft has, once again after decades of miss-direction, focused on users. Likely their most important class as well, those folks that use the platform to create things. I mean for those that just use a PC to do email and word processing, all they need is office and the OS to get out of their way, but Creators have to use a variety of apps, push the envelope of performance, and now need support for things like 4K and HDR. These are people that generally know what they want, will drive development (give Microsoft direction), and refresh their PCs faster than those that just need the basics. Gaming is another class of folks that will drive a platform and you’ll see a bit of a focus on those folks as well though, I expect, you’ll see a much tighter focus on that audience with products like the Xbox.

Microsoft lost its way with Windows after Windows 95 largely because they had so many customers that they seemed to lose focus on all of them for a time and went to breaking and fixing the product because they lacked direction. This was kind of like driving blind by bouncing off the guard rails on the freeway but never even knowing which exit ramp to take. With Windows 10 Creator’s edition Microsoft seems to have opened it eyes, regained focus on the most important class of PC user, creators, and if they can maintain that focus, the days of bouncing off the guard rails and products like Windows ME, 2000, Vista, and 8 are far less likely to recur.

On April 11, you’ll see a lot of compelling new capabilities in Windows, but the most compelling is a renewed focus on you. And that may, in the end, be the equivalent of a killer app.

A “squeezable” phone? HTC is planning one.