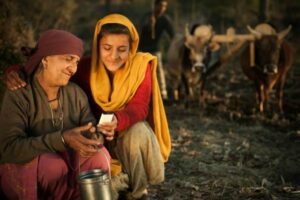 Android is an open source mobile platform. The openness of Android has been utilised by phone makers across the globe to good effect.

India is one of the biggest smartphone markets right now, with over 90 percent users preferring Android. But it’s shocking that till now not a single technology company from the country has tried to give Android a local touch.

Here’s the interesting bit, most Micromax phones under Rs 10,000 are powered by the Indus OS and that in itself explains the company’s current status in the OS market share charts.

So, what’s new about the Indus OS that’s not on offer from brands like Samsung and LG, who’ve developed vernacular OSs for their devices.

That’s the motto of the company and going by their strategy, it seems fairly straightforward. The Indus OS has been designed with simplicity and Indian users in mind.

Rakesh Deshmukh, CEO, Indus OS90 percent of people in India do not consider English as their 1st,2nd or 3rd language. Keeping this in mind, the OS was developed for creating a simple experience with customization for the audience in question

More than 20 million consumers are still using feature phones and for Indus, that is where their focus will remain.

People shifting from a feature phone to smartphone becomes a factor. The idea is to simplify the transition for them, as well as give existing smartphone users a regional experience so that they can use the smartphone to its full capacity.

There isn’t any different between the way a pure Vanilla Android version looks and the Indus OS. Most of the kernel structure remains the same, and the changes are mostly visible when using certain features on the phone.

The company has built on the framework of the Android Open Source Project (AOSP) to customise it for the Indian audience.

Features on the Indus OS

We’ve seen many mobile brands offering pre-installed apps on their devices, commonly known as bloatware. And the main man at Indus OS had an interesting take on the practice:

For the first timebuyer – when everything is new – for them, using the smartphone tends to be like a stage of discovery.

However, Rakesh went onto add that the company ensures that the user experience on the Indus OS isn’t compromised just for the sake of adding apps.

When it comes to Indus, the decision also involves what the mobile brand in question wants to do.

Taking It in Their Stride

Currently, Micromax is the only brand running the Indus OS on their phones. But the company expects more brands to adopt the OS, in the near future.

Though it has not been anything exclusive with Micromax, however, the idea of working with one brand has turned out be very successful till now. We’ll be adding more OEM’s to our Indus OS catalogue in the next couple of months.

Things are bound to get intriguing for the company, now that they will be working with not one, but multiple brands. And that’s where the real challenge is.