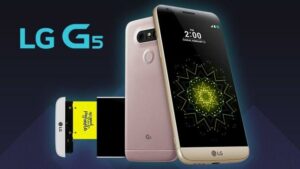 Smartphones, these days, are designed using a tried-and-tested but slightly predictable formula. Imagine any shape(as long as it’s rectangular!), add in liberal amounts of glass and plastic (or metal, if you’re aiming for a premium look),tack on a camera and a home button and your basic design is ready!

Hats off then to LG for trying something out of the box with the G5,the first smartphone with a modular design that allows you to clip on camera or high-quality-music modules, swap out batteries,and possibly much more in the future.

So, it’s blessed with a unique ability, but how does the G5 measure up as a premium-priced flagshipdevice vying for your wallet?

At first glance, the G5 looks like an incremental update over its predecessors, with its characteristic button-free frontface that curves ever so slightly towards the top, with the power button and built-in fingerprint scanner around the rear, below the camera setup.

Of course, the headline news is that the bottom is removable and swappable, so you can swap out thebattery, add an accessory like the Bang & Olufsen branded Hi-Fi Plus DAC (digital-to-analog converter) to improve audiooutput or the Cam Plus camera grip that not only adds dedicated buttons for zoom and shutter but also boosts the internal2800mAh battery to a whopping 4000mAh!

For this review, we only had the standard module, which only serves the purpose ofswapping out the battery for a spare (which in itself is a feature we see requested all too often), but the modular approachspeaks to the future of expansion capabilities if the concept catches on, and full points to LG for taking this bold a step.

The real winner for me was the dual-camera setup on the G5. LG has kitted the G5 with a regular 16-megapixel (f/1.8) and a8-megapixel (f/2.4) wide-angle, and both cameras are ably supported by laser autofocus, 3-axis optical image stabilisationand an LED flash.

The main 16-megapixel shooter focusses fast and turns out rich, detailed images in good light, and the f/1.8 lensproduced a pleasing ‘bokeh’ effect without the need of software wizardry.

That said, while low light performance is pretty good, it wasn’t at par with the S7 range, with the occasional instances of noise creeping into the images.

What really sealed the deal for the G5’s camera was the wide-angle 135-degree lens on the secondary 8-megapixel camera, which means you can capture much more in one scene, albeit with a slight fish-eye effect at the edges.

The removable battery of the LG G5.

Switching between the cameras is seamless with just a tap on the camera app and it adds a completely new dimension to group, landscape and architecture photos. Make no mistake – this isn’t some cutesy software effect, and I found myself increasingly preferring the wide-angle option over the regular snapper.

With the modular design and the dual-camera setup, it’s easy to forget that the G5 is a flagship device in pretty much every sense.

Specs wise, the only downside was the 32GB built-in storage, which means you’ll have to pick between additional storage or a second SIM. Performance is snappy and battery life is acceptable at a day’s worth of moderate use, and remember, you can swap it out for a spare or use the quick charging capabilities to juice it up in a pinch.

Modular design has its tradeoffs. Pulling out the module by pressing the small eject button on the side takes some effort, andeven when the module is firmly back in place, there’s an extremely small but perceptible gap that mars the metal unibody effect.

The metal itself is coated in plastic paint, which gives it that fake metal-plastic feel in the hand, which frankly, is a bit disappointing.

The not-so-flashy body of the LG G5.

A lot of the design elements may have been forgiven had the Friendsecosystem been packing a lot more power at launch, but with only two available modules right now, it could be argued that while themodular design may get your attention, it won’t necessarily compel you to make the purchase.

It’s a peek into the future, but there should have been more modules to play with for it to truly be the G5’s selling point.

Take modularity away and the G5 is still a pretty capable flagship device, a true power user’s device with a lot more flexibility andupgradability than any other flagship. But the lack of more ‘modular’ features means you’ll really have to want that flexibility to choose the G5 overthe best flagship available at the moment.

(Tushar Kanwar is a technology columnist and commentator. He can be reached on Twitter: @2shar.)

Indus OS, An Android Version Tailored for The Indian Market

Mitsubishi Outlander Can Be Hacked Via WiFi