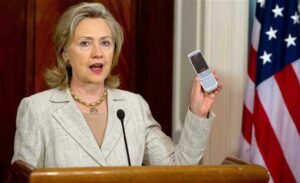 There has been a lot of talk about Hillary Clinton’s missing emails. After turning over what we suspect were thousands of meaningless emails, Clinton (or at least a member of her personal staff) wiped the hard drive on her personal server that was used to store her communications.

Clinton claimed that she (or at least a member of her personal staff) reviewed the thousands of other emails (by searching for keywords that might indicate they contain official government phrases) and determined that everything else was ‘personal’ and so they deleted everything.

I don’t know about you but I have never completely wiped the hard drives on my computer until after I had copied all the important files (including personal data) and that was usually a long, drawn-out and usually painful experience. I usually end up copying entire directories to a new disk even if only some of the information is still important – there are just too many files to wade through, picking and choosing which ones to copy and which ones to delete (and I’m a fairly organized person who has separate directories for all sorts of things).

The only time someone wipes a hard drive completely is when they are selling their computer, are throwing it away or they are worried that someone is going to find something they don’t want found.

I also suspect that if you were Secretary of State the percentage of work-related emails would far outweigh the number of personal emails (unless you were shirking your official responsibilities).

But the question isn’t ‘what emails did Hillary want to hide?’ it’s more about how government officials are using and possibly abusing technology.

A number of critics have already pointed out that even with the missing 18.5 minutes of White House tapes Nixon did not have the authority to review the tapes and have portions erased at his personal discretion.

As tweeting and texting and social media begins to infiltrate the halls of Congress we are already seeing goofs and gaffs that reveal that many people simply don’t understand the power (and consequences) of technology.

Now I assume that Hillary’s personal tech-minions are reasonably adept at what they do and should be able to wipe a hard drive permanently (and I don’t mean simply moving emails to the trash bin or even reformatting the drive – neither act actually removes all traces of its content) but truly paranoid people use read/write sweeps, electromagnetic devices and finally drilling actual holes through the drives. Did they go to these extremes? And, if Hillary used Facebook, Google, or Apple, did her minions hack those companies to erase the copies of emails that those companies may have sucked up? Or the cellphone carrier she used? Did she ask the NSA to delete the copies of the data they most certainly collected, because if the NSA was going to spy on anyone, wouldn’t high-ranking elected officials be near the top of their lists?

Wiping her hard drives may have been a good start (if she was hiding anything) but does Hillary or her staff even realize that once something is transmitted in electronic form it can never be completely erased?

Are you going to buy an Apple Watch? (Or not?)

Next Star Wars Trailer to Play Before Avengers Age of Ultron