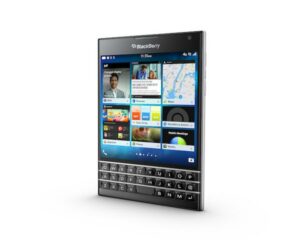 Go back a little more than a decade and Apple was a company in the middle of a turnaround with a relatively small group of very loyal users who relished in their difference and that fact that “the rest of us” weren’t like everyone else.   The Apple faithful were unique in terms of their interests and Apple delivered a unique MB3 player and then a phone that embraced that uniqueness with a focus on entertainment.  You could say that Apple’s success arose out of the iPod revolution and transformed an industry.

Fast forward to now and the iPod is a fading memory. Everyone and their brother (and sister) either has an iPhone or an iPhone clone and Apple users are no longer rebels but stodgy members of the status quo.   Now folks are less concerned about getting easy access to their music and videos than they are about having their identities, private information (including pictures), and finances stolen.

Ironically, the folks that are truly “different” now are those using BlackBerry phones. They are now the elite in being able to argue their interests are focused more on making money than spending it and on being smarter with how they protect themselves in this increasingly dangerous and complex new mobile world.

In a way, the rebel Apple has become the market mainstay while BlackBerry, which once represented the common wisdom of the Smartphone segment, has become the rebel.   Could the two once again swap places?

The Pendulum Swings Both Ways

It fascinates me, given how this repeatedly happens, that people fail to see that the technology market tends to swing between two extremes.   It started out focused on Business with IBM taking the lead in centralized enterprise computing, then it swung to consumers with Commodore taking over much of the PC market and momentum. Then Microsoft took the market back to Business with Windows and back office products like Exchange and Windows Server, and Apple and Google swung it back to the consumer with iOS and Android.

Now Apple is partnering with IBM, and Samsung with BlackBerry to advance business mobility while IBM’s newest mainframe, their System Z zEnterprise EC 12, is their most profitable product. Meanwhile, Amazon, the power in consumer retail, is scaring the industry with their AWS public cloud offerings targeting business.

The Technology Pendulum is clearly on a business swing today and BlackBerry appears to be uniquely aligned to benefit from that momentum.   They now have a relatively small but very loyal group of users who remained more focused on getting work done than they were on spending money for fun apps, games, music, or video.  They have also remained more secure as users of Apple and Android products lost their information or personal pictures to hackers who wanted to do damage to them.

Steve Jobs was the iconic Apple CEO who had a revolutionary vision for his firm and took it to heights that I doubt even he believed it could reach.   Steve was replaced at Apple with his near exact opposite, Tim Cook, who, while operationally very capable, hasn’t be able to demonstrate the same kind of magic or industry leadership that Steve was famous for.  Jobs was the lead rebel arguing that computers in all sizes could be fun and life wasn’t all about business.  Cook seems more intent on ensuring that Apple’s trains run on time rather than enabling customers to visit exciting, inspiring new destinations.

John Chen, BlackBerry’s CEO, speaks to BlackBerry fans directly in order to win their support.  Like Jobs did at Apple, Chen’s strategy is to return BlackBerry to its successful roots by focusing it back on business and people who want their phones to work for a living.  Chen is the lead rebel for BlackBerry arguing that mobile devices aren’t all about fun and that people need to earn money to more than make ends meet. Most importantly, in order to survive in an ever hostile world, their technologies needs to be far safer and more secure.  In other words, to be like BlackBerry.

Wrapping Up:  Finding their Identity

Apple was successful largely because Steve Jobs found a way to make it into a better Apple, killing the prior strategy that seemed to be focused on making Apple into just another Compaq or Microsoft.  John Chen has effectively killed the traditional BlackBerry strategy of becoming a different Apple and is intent on making the company a better BlackBerry and, just as Jobs did with Apple, getting the company focused back on what it does best; business.

Last week BlackBerry demonstrated that, while not out of the woods yet, they can now see the way forward and their financial performance has improved massively much like it did for Apple a little over a decade ago.   In many ways, BlackBerry is mirroring Apple but not by copying them like Samsung is attempting. Instead, Chen is emulating Steve Jobs’ practices to create a firm that does better what it already does best.

It is nice to see someone was watching Jobs and learned the deep lesson that it is always better to strive to be a better you than a better someone else.   BlackBerry has taken Apple’s place as the scrappy competitor ready and able to lead the next swing of the technology pendulum.   This one focused back on business.

The 3 reasons why I love Kim Kardashian