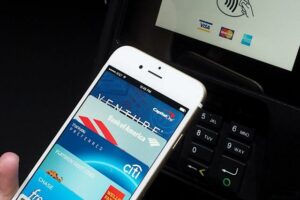 Apple Pay just bumped heads with CurrentC.  Apple had a huge roll out of their Apple Pay NFC (Near Field Communication) service and then both Rite Aid and CVS turned off their NFC terminals so that the millions of Apple customers couldn’t use their new service at their drug stores.   This was done because they had an exclusivity agreement with another service, CurrentC, which apparently isn’t even working yet.   I think both of these firms are screwed and that Walgreens and other drugstores that haven’t made this idiotic decision are sure to benefit.  Let me explain.

Other than the fact that CurrentC isn’t even working yet it is focused on using an ATM debit card like model and making money off of each transaction rather than using a credit card model and sharing the revenue the credit card companies already make.   CurrentC also is set up to track and report customer activity while Apple currently has no plan to do that.  The credit card approach that Apple uses is far safer because if the service is compromised your protections are far more robust while if someone drains your checking account it is far harder to get your money back.  You add the tracking on top of this and you’d have to be stupid to use CurrentC, as a consumer, over Apple Pay.

I’m not calling for a boycott though it wouldn’t surprise me if a group of Apple customers did, the result could very much be the same.   Apple Pay is a key new feature of the latest Apple phones and an increasingly number of people will want to use this service.   They’ll learn pretty quickly that this service will not work at Rite Aid and CVS and start going to alternative drug stores like Walgreens in order to use this new service.   We’ve seen this happen at gas stations with credit cards in the past which is why most of the gas stations use virtually all of the major cards, they don’t what to lose customers to competitors.

Wrapping Up:  Rite Aid and CVS are Screwed

In the end, while I can understand why the two firms don’t want to violate an exclusivity contract that both signed, I think both firms are screwed.  Apple users are arguably the most loyal customers on the planet and Apple Pay is far better than CurrentC.  The end result of attempting to block Apple Pay, particularly before CurrentC is even working, is that both Rite Aid and CVS will bleed customers, potentially millions of them.   If CurrentC is breeched and people lose their bank accounts to hackers they might not even survive the event.

As a side note, no matter how bad your day is, you sure as heck wouldn’t want to be the guy this week who cut the CurrentC deal with Rite Aid and CVS.  He’ll be lucky to get a job at McDonalds after this mess.

Why is everyone so excited about Apple Pay?