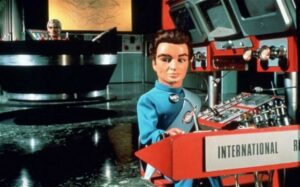 In 2012, we lost Gerry Anderson, the creator of the classic kids show Thunderbirds, which was a huge influence on today’s genre peeps, like Peter Jackson, who grew up with the program. While marionettes are pretty quaint today compared to today’s FX technology, it gives Thunderbirds a certain charm, and as you’ve probably guessed by now, there’s another attempt coming together to bring the Thunderbirds back.

The reboot was spearheaded by Richard Taylor, Jackson’s FX man, who’s won four Oscars. As Variety tells us, the show will be a combination of miniatures and CGI. (Jackson blended CG and real FX together to great effect in all his previous films, not strictly relying on one or the other.)

As Taylor told the industry trade, “One of the most important things was to get the CG to integrate into the world of the miniatures. It’s very easy to make the miniature look organic and real. It’s difficult to do the same with animated CG for fast-turnaround television.”

There was a previous attempt to bring the Thunderbirds back as a live action film, but we all know the miniature / puppet way is truly the way to go, because that’s how we remember and love it.

The new model Thunderbirds is set to take off sometime next year, no exact date yet, but we’ll let you know when it’s official.

Apple Pay vs. CurrentC: Rite Aid and CVS Are Screwed

The Avengers Are Loved World-Wide