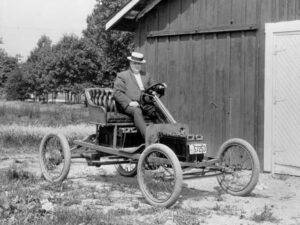 During a conference call today with Wall Street investment analysts and reporters, Ford’s CEO Mark Fields said that Ford could build a ‘Tesla Model S’-like vehicle if it wanted to.

Fields said that such a car would be “consistent with our product philosophy,” and added that the company has already been studying a Tesla Model S.

“We drove it. We took it apart. We put it back together and we drove it again,” he said.

The question, however, is even if Ford could build their own version of the Tesla Model S, could they actually sell them. In spite of extensive price cuts to the Ford Focus Electric so far the company has only managed to sell fewer than 4,000 of its only all-electric vehicle since it first hit the showrooms in 2011 (Tesla has sold roughly 25,000 Model S cars world wide).

Now hovering around $30K the Focus Electric boasts a range of somewhere just south of 80 miles while the Tesla Model S can go roughly 220 miles with the standard 60-kwh battery and about 280 miles if you spring for the optional 85-kwh battery for $10K more. Of course the Tesla Model S (with the beefed up battery) will set you back about $80K.

And of course the Tesla Model S looks like a luxury car while the Focus looks like a…well, a little electric car.

Fields’ comments remind me of that person who performed the first back flip on skis that was featured in a television commercial many years ago. Until he did it everyone would have sworn that the trick was impossible. Today Olympic skiers are doing quadruple back-spinning twisty impossible tricks that go far beyond a simple backflip.

Go back in time and ask Fields if it was possible to build a luxury all-electric car that could go faster than 100mph and travel nearly 300 miles on a single charge he would have told you it was impossible.

Now that Tesla has proven that it can be done Fields comments sound a bit like “Okay yea, I guess you could build a car like that if you did it that way.” And “We could have built one like that if we wanted to, we just didn’t want to.”