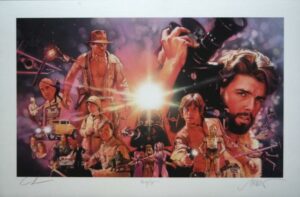 Drew Struzan is a legend in the poster business. He’s the acclaimed artist behind the posters for Star Wars, Harry Potter, Back to the Future, The Shawshank Redemption, and many other unforgettable ad campaigns. Along with the love and admiration from movie fans everywhere, he’s also receiving another honor.

The Hollywood Reporter tells us that Struzan has received the Saul Bass honor from the Key Art Awards. Bass is the famous art director who created the legendary ad campaigns and credits sequences for Vertigo, Psycho, Anatomy of a Murder, among others, and it’s certainly an honor to be in the same company as him.

Struzan has been retired since 2008, but here and there he still does artwork for people here and there, especially for Guillermo Del Toro, who’s a major fan. As Del Toro told the Reporter, “Drew manages to embody not only the film narrative in the poster but the actual magic of going to the movies. He encapsulates both an era and an experience.” As huge fans of Struzan, we feel his wonderful body of work speaks for itself, and will continue to for many years to come.

Buzz For Interstellar Getting Stronger