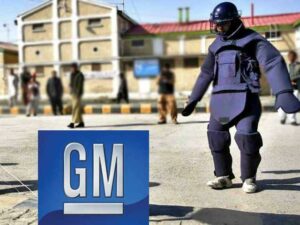 A scant two days after General Motors CEO Mary Barra announced the automobile giant would no longer manufacture defective cars and instead shift gears and start developing a self-destructing messaging app, tragedy struck at one of the company’s top secret research centers just outside Dearborn, MI when two automotive engineers were killed while testing a beta version of the new app.

While details of the accident are still sketchy it is suspected that the engineers were testing an iOS version the app that they had just installed on recently purchased iPhone 6 devices.

According to Jim Patterson, a firefighter who was one of the first on the scene, “The lab they were working in looked like a bomb went off inside. At first we thought it was some sort of terrorist attack or maybe they were testing some sort of experimental hydrogen-powered engine. But then we found a storage closet with literally hundreds of phones inside and that’s when we realized we were dealing with something much worse. It was pretty scary.”

The building was quickly evacuated and bomb disposal experts were called in to remove the unexploded phones from the scene. The phones were successfully carried out of the lab one by one and then taken to a remote location where they were safely detonated.

“When I first looked in that closet and saw all those iPhones, Android devices and Windows Phones my blood ran cold,” said one of the visibly shaken bomb disposal experts. “I’ve dealt with some pretty hairy situations over the years but the sight of all those phones packed into one closet terrified me. They even had a handful of Blackberrys in there! Blackberrys for god’s sake! What were they thinking! I hate to think what would have happened if they had all gone off at once. I think we were very lucky that more people weren’t killed here today.”

One noted iOS expert commented, “It’s tragic but I’m not surprised something like this happened. Self-destructing messaging apps are very tricky things to develop. You have to get everything just right or the whole thing can literally blow up in your face. It’s not like coming out with a new ringtone or Candy Crush knock off.”

In a printed statement representatives of GM said “We deeply regret this tragedy and our hearts go out to the families of the two men who lost their lives in this terrible accident. We are currently launching an investigation into exactly what happened and are already taking steps to insure the safety of all our employees as we go forward.”

Your Smartphone Is About To Get A New Superpower