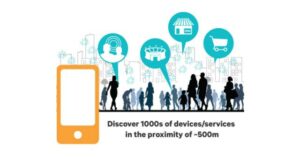 One of the technologies coming to market that folks aren’t talking about much is LTE Direct, Qualcomm refers to this as a Digital 6th Sense, and it is kind of like a Superpower for your phone.  LTE Direct allows the phone, by itself, to engage with things near it without the need for a carrier.  In effect your device becomes really chatty.  Somehow I doubt this Superpower would get you into the Avengers or Justice League but it could be incredibly useful nonetheless.  LTE direct is due out shortly as part of the next LTE 3GPP standard and is in trials worldwide according to Qualcomm which offers the related SDK (Software Developers Kit).

So what happens when your phone can talk to other phones and LTE devices directly?

This is probably the most interesting part, if you aren’t going through the carrier the tracking that the governments are doing with regard to your phone activity won’t work.  You aren’t going through the network so spying software running on the carrier’s network won’t pick up your activity unless something in running on one of the two devices that reports back this activity to the network.  I can see this appearing as a plot element on shows like Person of Interest but it could also be very useful if you are trying to communicate with your family while out of range of a cell tower, or during a disaster that takes out the cell towers (weather, earthquakes, or a drunk driver in a tank).

Since this service runs on your phone not on centralized network you can set what kind of offers you get through it.  Now location bases services haven’t exactly knocked to doors off advertising and I’m not expecting that to change any time soon largely because I don’t think retailers understand how to use these services and advertising agencies haven’t yet stepped up to the challenge.  I expect that will eventually change particularly as we move to connected wearable devices because the opportunity to flash ads in your face all the time is simply too compelling.  With LTE Direct though you at least should have some control over what it is gets flashed in your face because, at least for now, you hold and control the phone.  Network based location services will likely be less in your control.

This means you can specify things you might be interested in and when you’d be interested in it.  Like food before lunch and maybe a drugstore where you could get a deal on Pepto-Bismol after.   If you are looking for a specific car a dealership could list their used or new car inventory and you’re phone would simply alert you to stop and see the car that matches your requirements as you drive down your local Auto-Row.  (In California car dealerships tend to gather together on one street where you can sit and quietly watch folks do insane things as they try to figure out the buttons while driving).

One thing this service could do very nicely is let you know when something is happing nearby.   Let’s say you are flying someplace.  Tied to a service like Cortana which has your itinerary you could get a faster notice that your plane is boarding early (so you don’t wonder over late and find there is no overhead space left for your bag) or that the bus you want is approaching and provide the bus number.  Granted this would mean we’d need to share more of what we needed with our phone, calendar, or cloud service so that it would know what to look for but this could be rather handy.

This is likely the feature I like the most in that if you have kids or are traveling with a group it is easy for one or more of you to get separated and if there is a problem or a change that can become rather traumatic.   With LTE Direct you can not only directly contact each person in the group you can be aware of their proximity and if they start to get too far away from you set up  an alert so that you can keep them, or you, from being lost even if there aren’t cell towers nearby.  I remember getting lost at Disneyland when I was small and that was a very scary experience.  Given parents increasingly want to monitor kids an LTE direct device held by the child could help keep them safe and tracked within the 500m range of the service.   Since I’m missing a couple cats today I’m personally hoping for an LTE Direct technology that I can put on their collars.

Proximity would also work for things like bathrooms which tend to be rather hard to find when you are in a new city or location.  While we’ve all done the “I gotta go” dance and I expect are all expert at it, I’m sure none of us relish this experience and LTE Direct could point you the way to relief.

One of the more fascinating uses of LTE Direct is kind of a dating service capability.  Putting information on your interests the service could identify folks of either sex near you with similar interests.   At a party and don’t know who to talk to, your phone would show you the way.   Granted there is no guarantee people are being honest so you’d still have to use some care but this would be really handy and parties, mixers, or any time you are at an event with lots of people you don’t know.   An because this runs on the phone not on a central service it is more likely you can contain this information to just the folks at the event rather than everyone including people you really don’t want to get to know in strange faraway places.

Wrapping Up:  The Future

LTE Direct is, like a lot of the technologies being rapidly introduced, just a milestone on the path to where we are eventually going.   As we advance and start to blend devices and services each ever more aggressively able to talk to each other while being increasingly aware of our needs and proximity an artificial intelligence should emerge that can better anticipate our needs and assure our safety and the quality of our experiences.   We’ll certainly have hick-ups as companies and users won’t fully understand either the opportunities or the risks at first but eventually we’ll live in the world as more integrated component.

LTE Direct has advantages in privacy, range, and power over alternatives and you’re going to get it anyway so you might as well be ready.   I wonder if really quiet people will have the chattiest phones in the future.

Microsoft Gets Serious About Security in Windows 10