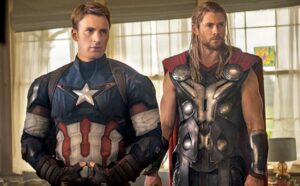 So the trailer for Avengers Age of Ultron has leaked, but we’re wondering. Something tells us that maybe it didn’t leak, because it’s now everywhere, and there hasn’t been a huge effort to try and bring the trailer down at all.

In fact, we even got linked e-mailed to us from Disney the night of the alleged leak with a note encouraging us to share it with our friends. So maybe the news that the trailer was going to premiere next Tuesday on an episode of SHIELD was a ruse, but in any event, we did see the trailer, and it is indeed very impressive. (The only mis-step to us was the silly rendition of the Pinocchio song “I’ve Got No Strings,” which Ultron quotes in one segment.)

As James Spader told Total Film and Collider, “There’s a humorous aspect to [Ultron], which is something that drew me in from the very first conversation I had with Joss Whedon. In many ways he’s a child, this character, because he’s a brand new being who’s just come to be. And yet, through artificial intelligence, he has an incredible capacity for knowledge. So he’s a very powerful, smart child…He is psychopathic. He’s really batsh*t crazy!”

We have the feeling that Joss Whedon may deliver a film as good, if not better, than the first Avengers, which is certainly a tough feat, but the fans expect it these days. Can Age of Ultron deliver this? We all know it’s going to make a ton of money opening weekend, but it will really have some serious legs if it indeed can blow away the original.

Back to the Future to Get Live Orchestra Screenings