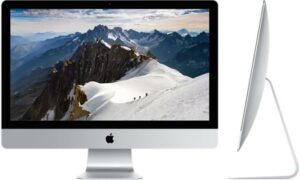 I wasn’t impressed with the new iPhones they were crippled by having relatively weak aluminum frames (a problem they are doing a poor job fixing but a nice job covering up) which both means they think we are stupid and that they are right.  Much of the technology was “me-too” and the most interesting thing in them was likely Apple Pay which mimics technology that has been around from others for some time just nobody used it.  The iPads were no better really they aren’t the thinnest nor do they have the best screens and they still are quite a bit more expensive than the better products that compete with them at the high end of the market.   They couldn’t even get their 12” iPad, which in and of itself is a Microsoft Surface copy, to market in time.

But the new iMac, now that is something to lust for and I mean really lust for.  When Apple starts showcasing that the whole “PC is Dead thing” is BS you have to stand up and listen and they certainly caught my attention.  And if you are going to bring something back from the dead what better month?

Let’s talk about all of this.

Don’t get me wrong Apple still leads on apps which are important to a lot of people but that is just one element in what I think the leading products should have.  Nokia leads on cameras and on inductive charging, HTC typically has better sound (though most of us use headphones so I’m not sure that matters), Sony on design (like making a phone waterproof), a number of vendors have fast charge batteries (near full charge in 15 to 30 minutes), and a number of vendors have moved off of FPS LED to OLED because the colors are amazing.   I think that if you are talking paying up to nearly $1,000 for a phone (what a fully loaded iPhone can cost) that it should have the best of everything given other phones are generally hundreds less.   Apple does have a fingerprint reader and it is pretty but given the price I don’t think that is near enough given how much this phone really costs.   Pretty and expense reminds me too much of bad parts of the times when I was single.

Much like the Smartphone tablets have gone different ways.  Nvidia’s Shield Tablet and Google’s new Nexus 9 are far better performers, the new Asus PadFone X Mini is far more innovative, the new Dell Venue is thinner, has an amazing camera, and has a better display, and I actually like the back end Amazon has better, and when it comes to business the Microsoft Surface products not only do that better they are actually in market (for some reason Apple can’t get it’s 12” tablet out the door).  The iPad Air gets a burst camera but to use it you have to look like a dork (seriously taking pictures with a large tablet, you should have a better camera on your smartphone anyway) and the iPad Mini which you might take a picture with gets a downgrade camera making it look a bit like a stripped down version of the iPad Air even though it costs twice what most of the other tablets cost in the same size class.  At least they should have fast charge batteries but Apple appears to have missed that meeting.   And again the Apple products are expensive, pretty, but competitively lacking in actual capability and reminding me even more of some really bad early relationships.

But the iMac Kicks Butt

While I think the iPhone and iPad folks are calling it in, not so with the iMac.  I have serious lust for this product.  It isn’t cheap but unlike the other products it appears to deliver value in line with its price.  The key feature being a 27” Retina display.  You have to see this puppy to appreciate it.  I’ve just started testing 4K displays and they aren’t cheap but if you have the right graphics card they do look amazing and the iMac is up there with the best.  It actually has around 64% more pixels than a 4K display which is why Apple is calling it a 5K.  This PC takes a design that was starting to look dated and just freshens it enough to make it current again.   It weds an Intel Core i5 processor running at 3.5 GHz and an AMD Radeon graphics processor to drive the screen.  The only thing it is missing is touch but with larger displays folks tend to set them back on the desk a bit making touch inconvenient so I don’t see this as a major shortcoming given I doubt many would actually use it.

I’m not aware of an all-in-one computer that is even on the same planet as this one and if you are paying a premium for the best actually getting the best is a good value.   Even if you don’t like Macs this kind of performance is likely the future of PCs and ironically, given Apple was the lead rebel in the death to PCs fight, it is Apple that has delivered the strongest counterpoint to the concept.  The new iMac with 5K Retinal Display is simply stunning.

Wrapping Up:  Now if the iPad and iPhone Folks Would Just Step Up

Without Steve Jobs at Apple the company has always drifted towards mediocrity as succeeding CEOs focus increasingly on competitors, maintaining margins, and forget about technology leadership and even design in the process.   Fortunately the design problem hasn’t emerged yet but increasingly iPhones and iPads are dropping behind others in technology leadership and iPods, the product that turned the company around, are all but forgotten.  But on PCs, the platform that created the company, folks are still playing their “A” game and the new iMac with Retinal Display is a showcase.  Historically the firm eventually drags down the last remaining Jobs’ effort but there is always a chance this example will get the others back on the same page.  Let’s hope so because an iPhone, iPad or even iPod built with the same leadership of this new iMac would be amazing.

Effectively Apple just declared the PC Undead which is well timed given how close to Halloween we are.  Hmmm, come to think of it, if Jobs were to come back as a ghost wouldn’t he lead with the follow on to the product, the original Mac, that made him famous?

Pee Wee Herman is Back