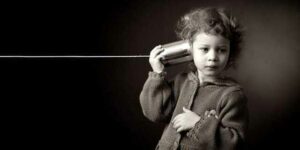 When the first mobile phones hit the market I predicted that they would kill the pager. Why send someone a pager message when you could actually call them on a device that wasn’t a whole lot bigger?

And I was right…to a certain degree. The mobile phone did kill the pager, but not because people would rather speak to each other. It was because the mobile phone replaced the pager by offering a better way to send messages. With a phone you have little keyboards and can send text messages of any length without have to resort to all sorts of pager codes.

I read an excellent article by Elizabeth Renzetti on the Globe and Mail website called “Just a phone call away from a silent future.” In the article she talks about all the people waiting in line at Apple stores around the world.

“Looking at the lineups outside Apple shops around the world, I was struck by something: Many people were on their phones, but no one was actually talking. Their heads were bent, more likely in text than in prayer. Fingers flew, but not because they were dialing. No one had a phone up to her ear, speaking. That’s because phones aren’t meant for phoning anymore,” she wrote.

“Take a look at some of the reviews of the new iPhone: They praise its size, its elegance, the power of its camera and the clarity of its screen and the virility of its battery, but none of them mention anything about the actual talky bits. I’m only assuming you can still use it for conversations. Maybe not.

“A phone call, once the province of friendship, sympathy or lust, is now just another unwanted intrusion, the aural equivalent of junk mail. We want to be distracted, but we want to choose the time and place of our distractions. Anything else rankles.”

Someone commenting on Ms. Renzetti’s very well written article said “I find little to be more annoying than someone talking on a cellphone in public. The silence of the texters is a welcome change.”

Any among us with teenage or twenty-something children already know that a phone call will more than likely go unanswered and voicemail messages are only sporadically returned. However, if you text your offspring you may not get a response right away but you are much more likely to get a text back sooner or later (particularly if the response can be phrased with a text-friendly, simple ‘yes’ or ‘no’). This does get a little better as our children grow older and begin to realize that their parents are actually people.

And I suppose that I have to agree with another commenter who said, “Let us not forget that a century ago the handwritten letter was the primary form of long, and often short, distance communication.”

And I have to admit that if I don’t recognize an incoming call number I rarely answer the call and instead just wait for the robot (silent or otherwise) to leave a message, which I can listen to (and usually delete) at my convenience.

Why do people have so many phones?